Windows deffender flagged osc-midi-windows.exe as a trojan horse.
I also ran that one through VirusTotal and a few scanners returned positive. 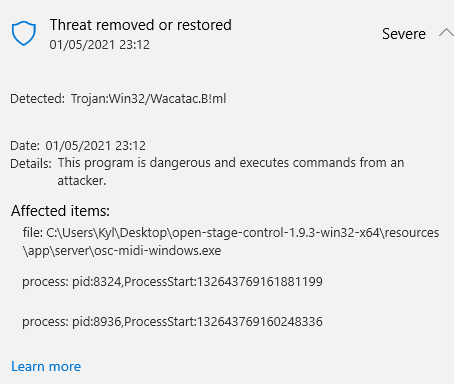 Can this be ignore?

And that gives no issues?
I would like to shush Windows as well.

It doesn't appear to have any problems, although the Open Stage Control console does tell you that it's an older version.

Just out of curiosity, I downloaded "pyinstaller" which is what I believe jean-emmanuel uses to compile that osc-midi-window.exe file. When I compile it myself with pyinstaller the executable I generate does not produce the antivirus warnings.

I suspect jean-emmanuel is using a cross compiler, which may be the source of the false positives (assuming they're false positives). The osc-midi-windows.exe I generate has a different size and signature than the one in the download.

Yes the problem is linked to pyinstaller, and yes it is a false positive alert. There's nothing I can do about it. Using older binaries may lead to unexpected behavior. If you don't want to take any risk, you can follow the installation process for other systems here.