Hello, trying to download the “open-stage-control-1.8.2-win32-x64.zip” for a Surface Pro 4. It keeps dropping the download at about 40% and my anti-virus (Avast) pops up with “…infected with Win64:Trojan-gen”. Anyone else have this problem? Appreciate any suggestions for a workaround. Thanks, Graham

It seems the tool I use to build the executable may encounter this issue: https://github.com/pyinstaller/pyinstaller/issues?q=is%3Aissue+virus+is%3Aclosed I don’t think there’s anything I can do besides telling you to report it as a false positive… the sources for this file are here and the build process is here.

It's always the same issue, the midi binary was rebuilt for this release, hence the new false positive alert.

Actually, even with creating an exception on the antivirus, deactivating it and downloading it again, I still have strange error messages with 1.9.0 I didn't get on 1.8.15...

What are the error messages exactly ?

This is the log on the server. The Error appears everytime I activate a control (tab, button, etc). 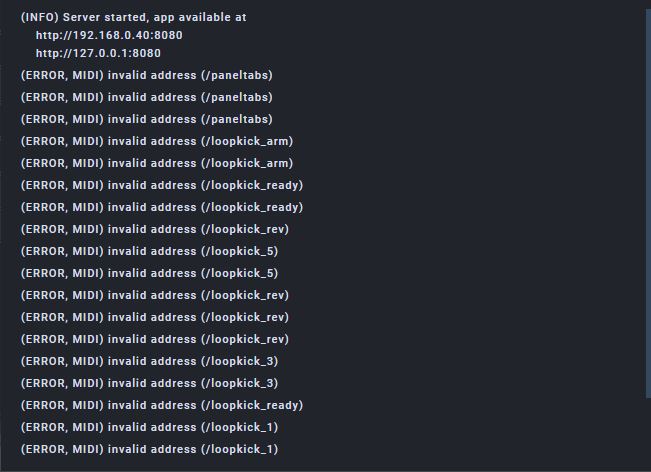 Previously I had JS error messages linked to the osc-midi-windows.exe that could "not launch itself" I think (didn't capture them) but they've disappeared now - the antivirus exception maybe took some time to activate...

Here is the .json if you want to have a look.

... and actually the server does not work (remote address is not working on another device)...

These error are not related to the update, they occur because you set a midi target on widgets that are not configured to send midi (your panels/tabs). Instead of inheriting the target with @{parent.target}, you could define the target in the root's variables property and retrieve it wherever needed. Or you can set bypass to true on the containers that trigger the error (but this will prevent tab synchronization if you want to use the interface on multiple devices at the same time).

Previously I had JS error messages linked to the osc-midi-windows.exe that could "not launch itself" I think (didn't capture them) but they've disappeared now - the antivirus exception maybe took some time to activate...

That was indeed the antivirus blocking the midi executable.

... and actually the server does not work (remote address is not working on another device)...

I guess the antivirus is still preventing it from working properly

The antivirus would only mess with the midi backend (responsible for sending/receiving midi messages) but the errors in your screenshot show that it runs fine actually. This is most likely an network issue or a firewall issue. When running the server with the default client interface (no-gui option not activated), does the app show up ? If it does, the server is running.

Okaye.
I had to desinstall Avast and reboot for the server to work again. That's a workaround.

Regarding midi targets : You're right, the error messages are related to widgets where I left the default @{parent.target} and do not use this directly, using script instead, and the error disappears when I delete the target. I don't think I had this error in the previous version, but hey.

To answer your 1st question, you should be able to load a v1.9.0 session in v1.8.15 by replacing the first "content" key at the beginning of the file with "session".