I would love to have the functionality where dropdown items act like push buttons.

I got that the buttons on a switch widget can't act as though they were push buttons. Ok. But in a dropdown widget it really makes sense to have at least one more option. In the current functionality, dropdown items can't be clicked twice. For example, if it's already selected, clicking "Value 1" a second time is impossible. You must click another item first.

I went for a different approach that should solve your problem, as of next version, menu, switch and dropdown widgets will reset their value to undefined when receiving a value that's not defined in values. You'll be able to make a menu reset itself after a value has been selected using its script property:

I've tested the dropdown widget in the 1.9.3 version and It acts like it's supposed to. I can't seem though to get rid of the check mark. Would be nice if it disappeared completely. 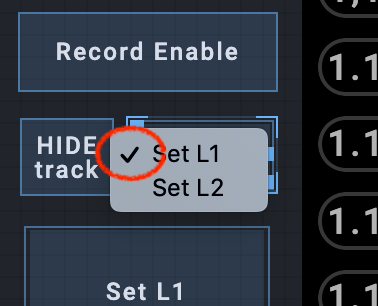 As far as I can tell it's a chrome on mac os bug, the dropdown is not rendered by OSC but by the browser and it refuses to display a dropdown without a checkmark even if no option is selected... You can still use a vertical menu !

No worries. Thanks anyway!

EDIT 2:
I've installed Mozilla Firefox (v.88) on my tablet. Works like a charm.