I have a fader here, and I wanted to use the CC119 to reverse control it.

I already sent midi messages from cubase to OSC now, and it is recieving the CC119 from the input properly.

But how excatly should I do to make my fader to read that recieved message?

Do you mean the fader receives the CC119 value and updates its handle position according to the CC value?

If you're using C12 MIDI Remote, make sure to change the control Value Mode to "Jump".
(the default is set to "Scaled").
Then, to avoid MIDI feedback, you need to create two virtual ports (for example "fromOSC" and "toOSC").
Connect the Cubase Input to "fromOSC" and the output to "toOSC".
In the server MIDI configuration prop add a line looking like this:
oscMIDI:toOSC,fromOSC
In the fader prop target use:
midi:oscMIDI

Quite tricky and laborious, but it works

Wait so the result is the touchscreen fader moves based on cc data in cubase? Like motorized faders?
Is this possible with Generic Remote?

or do you just want to get a fader mirroring a control change midi signal (cc119) and vice-versa ?

Wait so the result is the touchscreen fader moves based on cc data in cubase? Like motorized faders?

Is this possible with Generic Remote?

Yes, it's possible with Generic Remote too

MIDI ports configuration are the same.
You just need to set the GR command flags to R and T (Receive and Transmit).

I'm having trouble getting this to work properly. 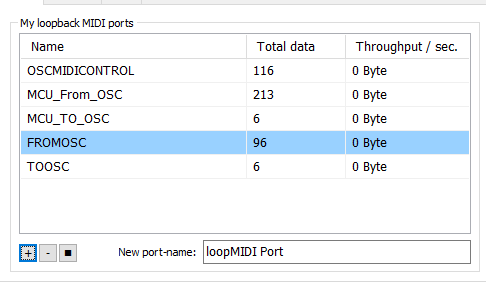 I have a simple fader controlling CC 11, 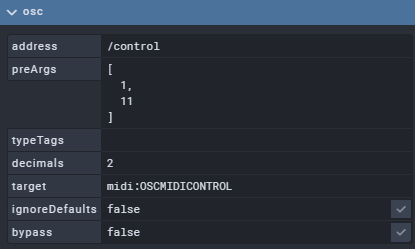 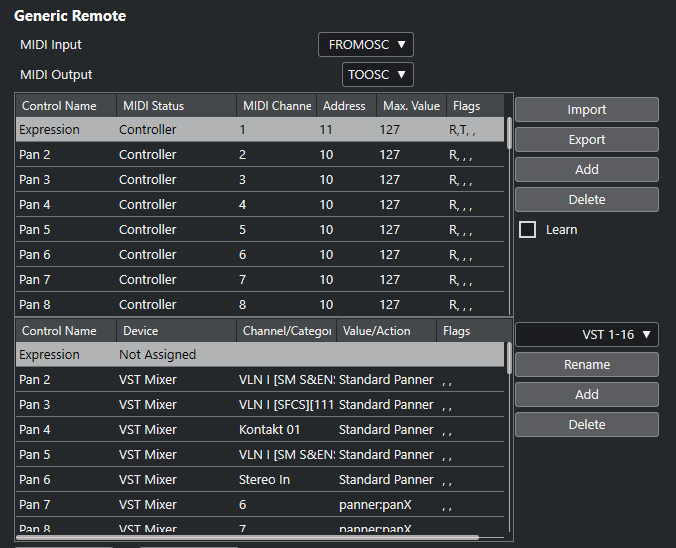 I have a track in Cubase with CC11 data in the region, but nothing occurs in OSC upon hitting play.
What am I doing wrong?

Oh, I see.
First, you need to map what parameter you want Cubase to send/receive in the GR. (see that Expression is Not Assigned, so Cubase doesn't know where to apply messages coming/going to channel 1 CC11).

However, if you want to monitor MIDI messages generated from the VST, it's not the way you think to use GR.
First, in order to do this, your VST must have an option to send MIDI out (the data you draw in CC lanes in the Cubase Editor are sent to the VST only). You have two options.

First one is using MIDI tracks in Cubase and set one "MIDI Sends" output to OSC. (this option is not available in Instrument Tracks and should be added on each MIDI track).

The second option is to map the GUI control of your VST to a quick control. This works dynamically when selecting a new track, but you need to map each track's quick control.

And what would I set the Expression "Not Assigned" parameter to? If I'm using the "MIDI Sends" option or using the VST QC option.

And what would I set the Expression "Not Assigned" parameter to?

Oh, I forgot to mention that's not possible to control instrument CCs from the Generic Remote.

Hi Clelson!
I'm trying not use the C12 MIDI Remote function for this since I'm building a control panel for all cubase users

So I have two seperate ports, one is fromOSC one is toOSC, they're called"OSC_C" in the MIDI configuration and I've asigned a midi send from cubase sending messages to the "toOSC".
Now my OSC can recieve the messages, I can see from the debug log that it recieves the right messages for the right port.

The thing is, the target of my fader is set to OSC_C, but it's still won't synch 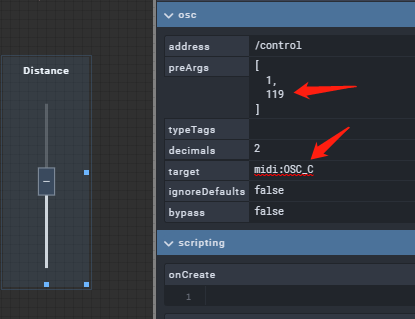 Oh I've made it!
It's simply becuase I previously make the fader to send “/control, 1, 119, value” in the script, and back then the target was set to a different one.
It didn't refresh the target when I used the "preArgs", it's still sending the messages to the "MyMIDI"(which is a different target) using the script.
Once I deleted that line of script, it's starting to send messages to the "OSC_C" using the "preArgs"
Then it's perfectly synchronised

@ClelsonLopes
There's another problem tho.
I wanted it to synch, because the "Distance" fader is controlling other 3 faders.
I was able to record these 3 faders as automation, but it's still too messy for 8 instruments(once I record them down, there would be 3x8=24 automations)
So I was thinking, is there a way for me to simply draw a line in Cubase, and then make it reverse control the "Distance" fader, which then make the 3 faders send control messages to control the mics in real-time.
Now the "synch" is working, the "Distance" fader is moving according to the cc119 value I drew, and those 3 other faders are also moving according to the "Distance" fader, but no one is sending any "out" messages, so they're just simply moving around instead of controlling anything...

I managed to send out the "Close" fader control message while the "Distance" is synching the cc119 now!
The trick is to keep "refreshing" the faders.
So I have a "refresher" here sending the current "Close" fader value back to itself every 0.5s
It's working perfectly!

Now I just need to think of a way to stop this auto "refresher"(best if I can send a group of code "clearInterval(t);" once the "Distance" fader stop moving, but I don't know how to trigger an event once a fader"stop") 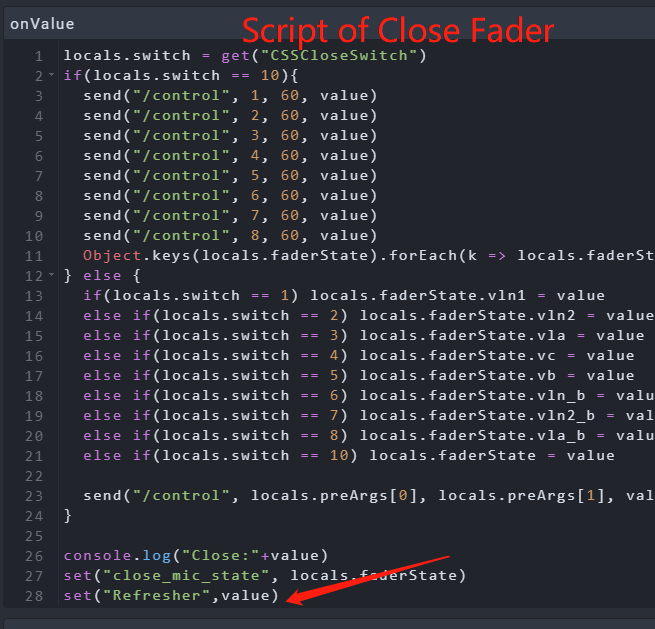